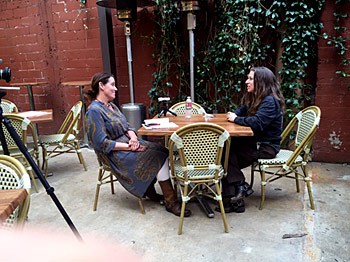 For any regular reader of the VCReporter, singer-songwriter, Rain Perry should be a familiar name. We have long followed the Ojai resident’s musical journey in our music section, and for good reason; the married mother of two is always up to something interesting.

Whether landing the theme song of a TV show and ultimately appearing in it, having her songs covered by the likes of Tom Russell and Nanci Griffith, holding songwriting workshops and events as well as house concerts in Ojai, or even writing and performing a one-woman multimedia show, Perry is seemingly always up for a challenge.

That said, it’s very likely she’s knee-deep in her most daunting project yet — but one that could ultimately garner the most exposure and success — directing and producing the full-length documentary film The Shopkeeper.

Musicians flirting with film production certainly isn’t a new concept, and the results over the years have been mixed. But what perhaps gives Perry’s venture a head start is that the subject is an important one to her, the story of her producer, the beloved and relatively unheralded Mark Hallman.

When working on her last record, the highly overlooked Men with the Austin-based producer at the helm, Perry became enthralled with his life story. Having seen the rise and fall of the music industry — first as an artist, then as a sideman and ultimately as studio owner and producer — she hinted that someone needed to make a documentary about him. As she tells it, the humble Hallman, like all good producers, planted the creative seed by simply suggesting to Perry, “Well . . . how ’bout you do it.”

Perry initially laughed it off, but the idea stayed with her, and as previously mentioned, being a woman who loves a good challenge, with no experience in film whatsoever, she decided to make a documentary about Hallman that would use his personal story to also tell the story of what’s happened to the music business.

“At first I thought, there’s no way I can commit to something like that,” explains Perry while taking a break from cataloging the hours of interviews she’s already conducted. “I didn’t even know how to do it. But I started to think about it, and I really did feel it was important to tell his story. It’s a perfect microcosm for what has changed in the music business and, more importantly, what’s been lost.”

So last year, she officially began production on the film and has been on a wild ride ever since. From traveling to Austin multiple times for interviews with Hallman, as well as filming a tribute concert to his famed studio Congress House; to speaking directly to a host of interesting artists, including Ani DiFranco (pictured with Perry) and Eliza Gilkyson, who have worked with Hallman; Perry has dived head first into the documentary game. Now, with only a few more interviews to get, including one or two massive and top-secret names, Perry has hours of footage and conversations to go through for the final cut, footage that she thinks has the makings of a great film.

Movies are obviously expensive to make, even documentaries, so an Indiegogo campaign was launched, and between Hallman’s and Perry’s friends and fans, an amazing $30,000 was raised to make the film. There’s more to go, however, as the post-production budget, primarily the licensing of important songs that Hallman has been involved with, is estimated at another $30,000. So as the filming winds down and fundraising revs back up (the hardest part of any indie film), Perry is at least confident about the product and hoping for an early 2016 release, possibly at the South by Southwest Film Festival in Austin, which, given the subject’s connection to the city, would be ideal.

As for filmmaking as a full-time endeavor, Perry is keeping her options open.

“Which to choose: The lucrative world of indie music or the lucrative world of documentary filmmaking?” she laughs.  “At this point in time, there is no money in either, so you might as well do what fills your heart. I will always be a musician and this may or may not be the only movie I make. We’ll see what happens.”